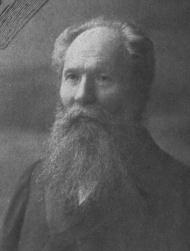 Yekheskl (Ezekiel) Kotik (1847-1921), was born in Kamenets-Litovsk. He is mainly known for his two-volume memoirs "Mayne Zikhroynes" (1913-1914). In the first volume of his memoirs the author describes his childhood in Kamenets; in the second volume his life in Belorusia and several cities in Russia proper.

The first volume was recently translated by Dr. D. Assaf into Hebrew and an English translation of this work will be published in the near future. [see: The Mendele Review, Vol. 03.007. 14 April 1999.]

The last chapter of the first volume and the first two chapters of the second volume have appeared in Yiddish (both Hebrew script and romanized) in The Mendele Review.

The second volume was translated into English by Lucas Bruyn. The first two chapters will appear on The Mendele Review in August 2000, the complete text appears here for the first time as a 'draft-version'. The translator wishes to thank all who contributed to the translation and the footnotes, especially Ms Naomi Fatouros. He also thanks his fellow translator, Mr. Martin Green, for being so kind to host Kotik on his Web-site. Click on the chapter headings below to read the book.

After grandma's death. - Grandfather goes to the matchmakers. - He suddenly turns up with a wife. - The impression it makes on the family.- "Grandma". - Grandfather's delight. - His new daughters. - Widely scattered. - Estates. - Where we are well-received. - Yokheved. - Leye. - We become estranged from grandfather. - No longer the Days of Awe of yore.

My father's gloom. - His longing. - The necessity to pray with Misnagdim. - Longing for the Rebbe. - The losses. - Khasidic joys of those days. - Rebbe Avremele. - His coming to Kamenits. - His grand arrival. - Khsidim cook and bake American style. - The bathhouse. - The Rebbe's delivery of the 'lekhu-geroneno' prayer. - The meals. - The Rebbe sighs. - 'shiraim' - Mr. Yisroel does not want to sing. - The power of the Rebbe.- Mr. Yekhezkl divorces his wife. - Khasidic pastimes. - They give my father a trashing. - I cry. - Having fun.

My uncle Khone Mates - Quite a different house - At peace - Sender Rozenblum. - They give me hope. - Lady Liubovitshove. - Rozenblum's energy. - His love for the Lady or the other way around. - People love to see a man at work. - I stay in Makarovtsi.

A concession and a tavern. - My wife arrives. - In business - Krinik. - The thieves of Krinik. - The 'akhim'. - Mr. Dovid Mreyne. - My letter. - Gibianski. - My trips to Grodno. - Khaytshe Hurvitsh [Khaye?]. - Khaytshe and the Governor. - The discussions in her 'salon'. - Czar Aleksander the Second. - His visits to Grodno.

A conversation with Khaitshe about the disposition of women, their fainting and their fits. - Makarovtsi. - The Russian and the Polish priest. - Our conversations. - Whose religion is superior? - The villagers of the neighbourhood. - The period of the Days of Awe. - Villagers take sons-in-law. - The purchasing of 'shtet' in the synagogues.

The life of villagers in those days. - Liubovitshove's prophecies. - Dobrozhinski - Lord Dobrozhinski's story. - His being drunk. - The little horse. - General Kislovki. - His peculiar habits. - His love of music. - Yosl Lider - A man of steel, but with no heart. - His tricks. - Yosl Lider and the Governor. - Ruvn get away!

Rozenblum's forest. - My forest job. - A cabin in the forest. - "He will always be a pauper!" - Lawyers. - Dobrozhinski. - German fashion clothes. - My father's letter. - Trousers. - My letter. - Another dispute with my father.

Liubovitshove again. - Her Influence on my wife. - I start having problems. - I am running after prescriptions. - A nasty affair with a horse. - Doctors. - I start thinking about moving on again. - I go to Kamenits. - At grandfather's in Pruske.- Excise tax evasion. - Denounced to the authorities. - Paper coins. -A friend of mine. - Black magic.

Grandfather. - Lord Shemet. - Kushelyeve. - Sir Shemet fools grandfather. - He leases a farm for me. - We leave Makarovtsi. - I become a real leaseholder. - At my father's. - The departure for Kushelyeve. - Hard-core trouble. - Business with goyim. - Wolves. - A scary "Huhu! Huhu!". - Moors. - Regrets. - Anton.

The forest burns. - A terrible fire. - I am confused. - We save our household items. Fifty dessiatins forest consumed by fire. - The forest burns again. - I run helter-skelter looking for people to extinguish the fire. - The 'Starost'. - Extinguished. - My agricultural plans. - A new misfortune. - A roof caved in. - Even bigger misfortune. - The child has fallen out of its crib. - My wife is sick. - The children are ill. - Running around. - Yankev-Yosl. - A woman with hallucinations. - Help!!!. - A problem about hair. - My lullaby.

The situation improves. - Visitors. - My father and sister. - Grandfather. - Cigars. - More upset [es rudert zikh]. - A contract with the farmers. - "Let's go, brothers!" - Tshernokove. - The Lord's dog. - Mr. Shemet's wife. - The daughter. - How Shemet made his fortune. - The scandal with the daughter. - She begs to come home. - A heavy scene at the fence. - The end of Shemet, his family and his fortune.

The 'Governor' of Selts. - A teacher. - They give me a 'fine' teacher. - He doesn't know Hebrew. - Antopoliye. - The second teacher. - The first one isn't in a hurry to leave. - The examination. - Shloymele. - I take pleasure in the sound of Gemore recitation. - I start studying. - Fear of Toysefes. - About studying in general. - The office clerk. - How one ought to study. - My love for Shloymele. - De Rov of Maltsh. - Summer in the fields. - Shloymele regains his strength. - Autumn. - Shloymele leaves. - My longing for Shloymele.

Jews of Kiev. - Khsidim. - Palmreading Gypsy-women [hanttrefer] and a young rogue. - A tale about a Rebbe. - Rebbes and finery. - Rebbe Dovid of Toln. - Dovid melekh Yisroel khay-vekayem. [er lebt un iz bashteyik]. - Rebbe Osher of Karlin. - The grand marriage ceremony held at the courts of Rebbe Osher of Karlin and the Rebbe of Trisk. - Khsidim as Cossacks. - Mr. Yisroels Cossack March. - A legend with a nice ending. - The Zhitne Market. - Jewish hope. - A breeze of liberty. - The Police sergeant Mikhaylov and a revolutionary boy. - A well known tragedy of Jewish parents.

Mr Yisroyel Brodki's manager. - An un-Jewish affliction - A business matter. - Rice and raisins. - Obstinacy. - Drowned goods. - Sliding downhill - I move to another shop. - Boarders. - Lipski. - A play hissed off the stage. - Old injuries. - The "Maged of Harod". - His influence on people. - His sermon. - The Maged of Harod and Lipski. - A regrettable ending.

The Russian-Turkish war. - The patriotic mood among Jews. - "We want to win the war! - Alexander the Second. - Good expectations. - It's bad without an income. - The shelves are getting empty. - Storitski - Bakery business. - Thefts. - Too honest. - Russia's victory. - Jewish joys. - What next?. - Regrets once more. - On the road again. - Charkov.

The vocational school. - An opening ceremony [khanuke habais - simkhe tsu banayen a hoyz]. - Misery from Grodman. - A new manager. - I can't stand it anymore. - Wandering on.

Back in Kiev. - Mr. Leyb Shapiro. - Wine. - I have an income. - A night of drunkenness. - The manifesto. - Charitable institutions in Kiev. - Mr. Hirsch Epsteyn. - Mandelshtam.

The murder of Alexander the Second. - The impression it made on Jews. - Ignatyev. - Bad news. - Vasilkov. - Khsidim of Vasilkov. - My 'certificate' . - Kievlyanin. - Get the Jews!. - People escape to America. - Ruffians. - Fear - The evening before the pogrom. - My good landlady. - It has started ... - Cruelty, caused by fear. - In the storehouse. - The emigration to the attic. - Attic live. - Mice. - Life comes to an end. - Mice speaking a human tongue. - Down from the attic. - My good landlady again. - Grownups cry like little children. - The pogrom is over. - Casualties. - The barrack. - Fleeing from here. - The death of my father and grandfather.

Texts used for the translation:

Footnotes referring to the first volume refer to the page numbers used in the second edition, Klal-Verlag, Berlin 1922.